So finally I finished up the impetus for this project – the Brigade Games U Boat.

Being a gaming piece first and foremost I wanted it to be easy to store and transport, so decided to not go overboard (see what I did there) with the detail. I made the decision early on to leave it as a three piece affair and to magnetize as many pieces as possible.

The kit came with a single 20mm, the 8.8cm deck gun, two periscopes, an UZO pedestal and the posts for the railing at the aft of the conning tower. Surprisingly missing were the iconic (to me) horseshoe shaped life rings. I was able to find some 1/48th scale ones on Shapeways along with a more detailed UZO and a circular range finder.

Assembly of the guns was pretty straight forward, and I magnetized the bases of these along with the periscopes and the UZO. I then used some solder to create the aft railing. I affixed the life rings but decided to leave off the RF antenna. It was housed in a box and I didn’t want to sacrifice any more real estate in the conning tower as I wanted to cram some based figures in there. 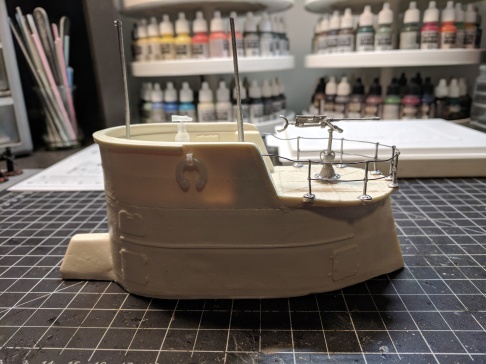 After that it was a matter of firing up the airbrush and giving it a coat of paint. The markings are hand painted and are my interpretation of the U-201 coat of arms and snowmen. 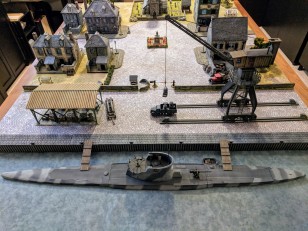 Additionally I scabbed together a couple of gangplanks from basswood strips. The rubber dinghy is from Bandai and the supplies are from the scrap box. 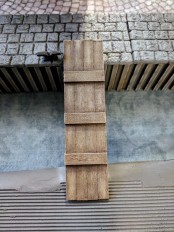 Finally I’ll put the finishing touches on the figures for the orders of battle and gin up a few play aids.

Like Loading...
This entry was posted on Wednesday, January 31st, 2018 at 15:09 and tagged with Articles, Builds, Chain of Command, Cold Wars, Miniature Games, Terrain, Too Fat Lardies, Wargaming, WWII and posted in Conventions. You can follow any responses to this entry through the RSS 2.0 feed.
« French Harbor Town – Part VIII
Workbench Hodgepodge »