“I look for ideas at conventions and on the web, then I steal them.” – Me

Back in 2013 I reviewed a 28mm Crescent Root Studios warehouse. It’s a great piece, but it hasn’t been in heavy rotation in my games. I think the driving factor was it didn’t have a purpose. It was just this big set of buildings without a theme in the context of my other terrain.

Thanks to Richard of Too Fat Lardies I found inspiration to resurrect the warehouse and turn it into something I will use more often. A few years ago Richard started posting a series on his blog about building a brewery. This, combined with the release of the 1940 Handbook for Chain of Command and an idea I had for running a game at Cold Wars, made me think that converting my warehouse into a brewery may be a good idea.

I could have just made a sign and strewn a few barrels about, but I wanted to take the opportunity to do a few minor upgrades otherwise I feared it would just sit around gathering dust again. I applied the same techniques to all the buildings, and have used the outbuilding/shed as an example.

I started by touching up the building walls by painting over some obvious tabs and then giving them a wash of Vallejo Sepia to bring out some detail.

I then turned my attention to the doors. I painted the hinges and pulls, gave them a wash and then some dry brushing.

Lastly, I focused on the roofs. The detail on these was a little soft, and they had tabs that were showing through so I decided to reshingle them. I purchased some self adhesive laser cut paper S-Scale shingles from Rail Scale Models. These were placed directly on the existing roof pieces. I then gave them a wash and dry brushed them with multiple colors. 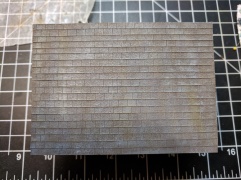 Once the buildings were done, I decided to copy Richard’s work a bit and add a smoke stack. I bought an HO stack from Walthers and covered it – somewhat poorly – with some textured brick paper a friend had given me. It was then given a wash and some light dry brushing. I then added an O-Scale ladder to cover up my awful vertical seams. It isn’t the best match for the other brickwork, but it’s good enough for me. 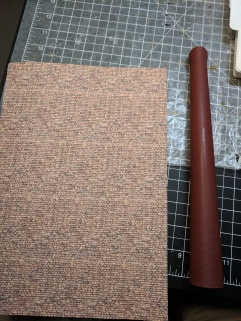 Next I applied the same techniques I used on the buildings to the walls and platforms by touching up some exposed tabs and giving them a wash. I then made the decision to make a permanent base. In the past I thought that I may use the platforms and/or walls in other settings, but that never happened. I had a piece of tempered hardboard that was the right size, and to this I attached a piece of JTT grass matt to act as a moisture barrier and a base for the flocking. 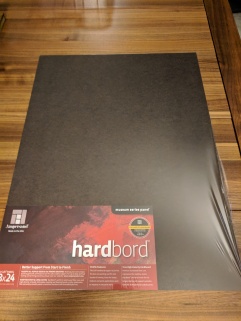 I layed out the walls and platforms, then once satisfied secured them with carpenter’s glue. After this had dried I applied the flock and tufts I wanted.

To add some final detail I wanted to add an illuminated sign. I had a 3V gooseneck lamp in my electronic gadgets box, so I wired it up with a switch. I then printed out a sign, affixed it to a thin MDF base and overpainted it. I simply attached it with poster putty so if I want to change theaters or whatnot I can. 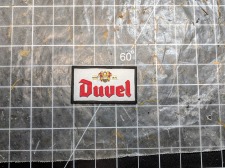 Overall I’m pleased with the outcome and feel that this will get the playtime that it always deserved. I’m also happy that, apart from the large base, that it still breaks down for easy storage. As with anything of mine I imagine it will evolve over time. I have more barrels to add, and am already on the lookout for a hand cart. 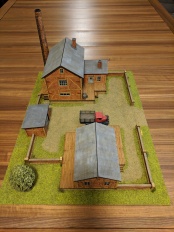