Board Game Purge – Phase I

Anyway, following on from last years D6 Consolidation Move post I finally packed up the load of board and magazine games that I was sending to Noble Knight. Here’s what 88 lbs. of cardboard and paper looks like.

A few months ago my dealings with some personal grief manifested itself in rearranging a portion of our basement to include moving the gaming table and a cabinet or two. In trying to keep up with my new “less is more” philosophy, this was followed up by a rather large purge of board games, and a less dramatic cleansing of some terrain and miniatures. It ended up being very cathartic for me, and I’m pleased with the results. 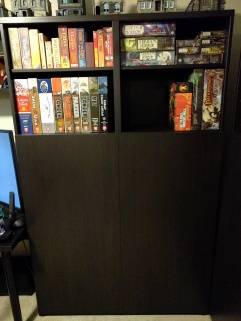 Here’s an IKEA BESTÅ cabinet that now holds all of my board games with a little room for some GMT additions that I have pre-ordered. The majority of the space is taken up by my ASL collection. It gets about zero playtime, but I can’t seem to let it go. According to professional organizer Marie Kondo, you should hold items in your hands and keep them only if they spark joy. ASL maps spark joy in me…

Another IKEA BESTÅ for the bulk of my finished miniatures. There are 10 slide out trays (which have unfortunately been discontinued) that I’ve placed self adhesive magnetic sheets in as most of my minis have metal bottoms of one type or another. The board game blow out also allowed me to replace some of the wooden shelves with glass ones for display.

I’ve been trying to populate these with small vignettes, but it’s still a work in progress. I will probably add some lighting in the future.

This IKEA BILLY bookcase has been around a really long time, but it’s still holding up – as long as it’s well secured to the wall. The bottom half stores my terrain and basing supplies and the upper shelves hold my reference and rule books.

Wait for it…more IKEA! My heritage is mostly Swedish, so please be patient. The ALEX drawers hold linear terrain, e.g., rivers and roads while the short BESTÅ contains mostly 28mm WWII vehicles and some one-off items. The relocation of these was one of the driving factors for the revamp, apart from my psychosis. The ALEX unit used to reside under the gaming table and the BESTÅ was across the room in a corner by the kid’s play area, so both were difficult to access. They now are in the open and in close proximity to the game table so, win. 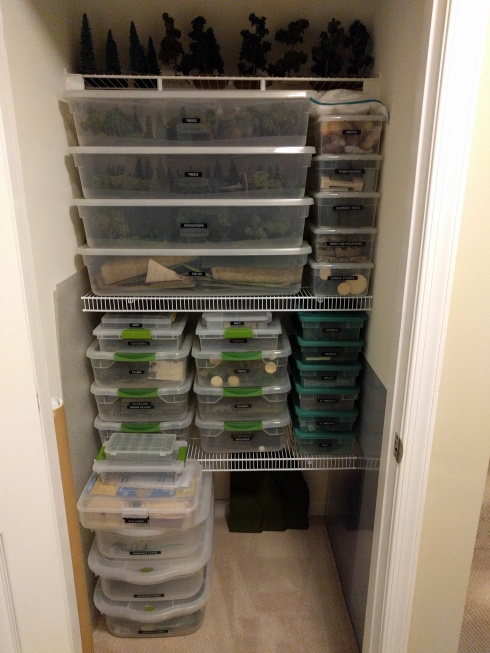 The least affected area was the terrain closet. I’m getting rid of a large container of Geo-Hex (which apparently is being produced again) as it goes largely unused.

As a finishing touch I moved the game table out from against the wall. So far this has worked out great as we now have 360º access, where as before one short edge was against the wall making it difficult to play certain scenarios. The placement has left ample room to walk around the perimeter, and I don’t feel that the table dominates the space even though it is a large piece of furniture.

I’m thankful I went through this exercise as it really has made the space more useful. I always find purging to be helpful as well but I have more work to do in that arena, namely:

One area where I do feel like I have a handle on things is my historical miniatures. Maybe I’m in denial, but I don’t feel like I have an unmanageable amount of unpainted lead/resin in this category. Maybe I should actually count it…

Anyway, enough rambling. All I can do is what we all do – learn from my mistakes, move on and try to improve. I’ll leave you with some wisdom from Atom Smasher who does it better than I.