The Rubicon Sherman kit includes parts to build a version with either the 75mm, 76mm or 105mm main gun. The 75mm and 105mm main guns use the same type of turret (and essentially the same model mantlet), and the 76mm has dedicated turret and mantlet parts. Unfortunately there is only one turret ring – the part that allows the turret to be attached to the upper hull – included. This means that, unless you are feeling creative, a commitment to one of the main gun types will have to be made. I decided to build mine with the 75mm. As an aside, Rubicon has stated that for their upcoming US tank destroyer releases they will include enough parts to make swappable turrets.

The turret assembly started with affixing the pistol port, the lower bustle and the turret ring. The fit of these parts was fair and I needed to sand all of them to get a better fit. Even then there was some seam filling to do in a later step. 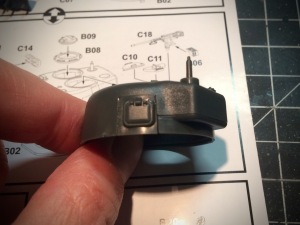 As Sherman turrets were cast, I wanted to try and texture the plastic to differentiate it from the welded hull. I used an old technique of coating small areas of the parts with liquid plastic cement and then “tapping” the surface with my finger. As the cement dissolved the plastic, the action of rolling and tapping my finger gave the turret a slightly rougher feel. 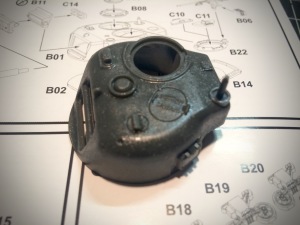 Between this step and the next, I added the commander’s cupola and hatch but neglected to photograph it. The 75mm turret comes with the older split commander’s hatch with the rotating ring and a pintle mount for the .50 cal. The way the part is notched it only allows for the pintle to face the rear, which was where I wanted it anyway.

I filled the seams around the pistol port and the lower bustle and sanded them somewhat smooth. I then  applied a rough line of putty along the seam created by the lower bustle part. Sherman turrets had a very noticeable weld here that I was trying to represent. After the putty dried I used the liquid cement technique over any areas that were sanded smooth.

As before, I neglected to photograph the next steps of mounting the mantlet and the main gun. I applied the same cast texturing technique to the mantlet, and used a pin vise to drill out the gun barrel. The elevation of the gun operated, however due to the length of the barrel it depressed to its minimum elevation. Rather than try and counter balance it I plan on gluing it in place once the kit is complete.

I decide to add a tank commander and chose a half-figure from Warlord. In order to facilitate mounting it in the commander’s hatch, I affixed a LITKO 15mm base to the inside of the turret. I then cleaned and mounted the TC.

I removed the antenna base on the left rear of the turret and countersunk a 1/16″ x 1/32″ magnet in the antenna mount. Using the plastic antenna base I fashioned an antenna using brass rod and another magnet so the antenna would be removable for storage. 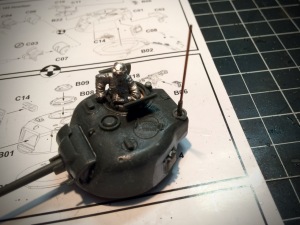 Using the same methods as with the antenna, I mounted magnets on the pintle and .50 cal so it could be removed as well. 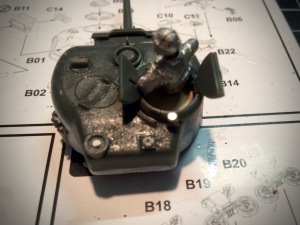 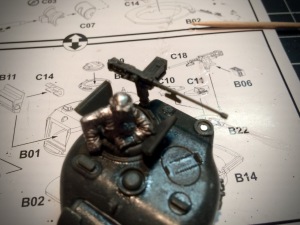 Adding some final details I drilled out the front lifting hook and added a stowage pack on the rear. The strap on the pack was made with lead foil from a wine label, and the pack is from a Tamiya kit.

Coming up in Part III I’ll begin working on the running gear and the lower hull.

Like Loading...
This entry was posted on Thursday, September 10th, 2015 at 12:26 and tagged with 1/56, Articles, Builds, Reviews, Rubicon, Sherman, Tank, US, Wargaming, WWII and posted in Articles, Builds, Reviews. You can follow any responses to this entry through the RSS 2.0 feed.
« Rubicon Sherman Build Part I – Unboxing
Rubicon Sherman Build Part III – Final Assembly »

One response to “Rubicon Sherman Build Part II – The Turret”